J.P.
Jean Pierre (known as J.P.) is the best flier at T.O.T.S., younger brother to P.J., youngest son of Meimei & Peipei and the adoptive father of Lucky.

J.P. Is a stork with a long reddish beak.  He has black hair with a bon. J.P. Wears his T.O.T.S. Uniform, which is a blue shirt with gold buttons, yellow stars on the collar, and a gold badge.

J.P. Is very egotistical and is always thought as himself as top deliver. He loves to look at his hair every chance he gets. He looks down on Pip and Freddy as baby delivers because there not storks. J.P. Has shown his softer side later in the series. While he's proud of being a Super-Duper Flyer, he dislikes the idea of taking credit for someone else's work no matter what reason, as he's shown feeling guilty over passing his Baby Skills test with Pip and Freddy doing a part of it for him. While J.P. enjoys looking good and being picture perfect, he's willing to make his son, Lucky, happy.

It's revealed in "The Super Duper Brother" that he feels very inferior to his older brother, P.J., who can do anything J.P. Himself can do, only better. 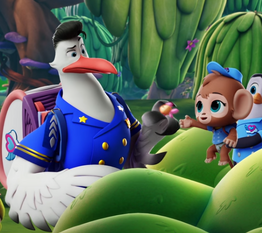