"Alright, Fliers. Let‘s get those tots to their moms and pops!" ― Captain Beakman.

Captain Candace Beakman is a female pelican who is the boss of T.O.T.S.. She is a supporting character in T.O.T.S.. She is also Mia's adoptive mother, the big sister of Cora Beakman and the sister in law of Sam.

Captain Beakman is a white and plum purple pelican with wavy white to purple shaded hair, her wings are tipped purple as well. She wears a violet captain's uniform, which also includes a captain's hat. She has brown eyes, and an orange beak with pink lips.

Beakman is very supportive to Pip and Freddy, personally choosing them to become T.O.T.S. junior fliers. She is kind, helpful, and believes in spreading love and making babies happy before they go to their forever family. She selected Pip and Freddy herself, as the first flamingo/penguin team because she believes every bird deserves a chance. Over the series she has shown how much faith and trust she has in them. In Season Two, she selected Pip and Freddy as fliers of the month because they always know how to make a baby smile happily, especially to her little Mia.

She adopted an adorable kitten, Mia, as her daughter. She is shown to be a good mother. She enjoys spending time with Mia, especially at bedtime. 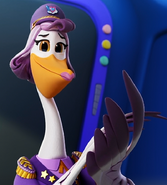 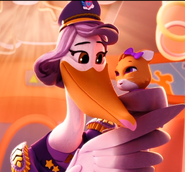 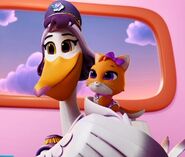 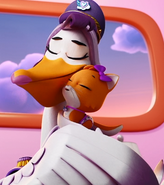